To Move a Wood Stove

We built this house very rushed. It was October and already the air was a little too crisp

to be sleeping in a tent without heat. We hurried right along and got in to the house just in time, but in the rush there were a few things that could have been done better. The wood stove is right in the middle of the house. We picked this spot for heat distribution purposes, but the house is small enough to where that doesn’t really matter. The problem with the middle of the house is that the chimney is in the middle of the roof. The chimney is tall and the roof is steep. You would need some very fancy chimney sweep gear to be able to clean the chimney, or even get to it for that matter. The way the chimney is on the house would also make it really annoying to try to put a roof on. Since neither of us has any idea how to put a metal roof on and since we (he) is the one that has to do it, we need it to be a simple job. So we decided to move the wood stove.

This is a project we were both dreading. He was dreading doing it and I was dreading what my involvement would be and what new fun words the kids might learn. To our surprise, the whole project was simple, expensive, and uneventful. I just need to add, if you don’t already know, how completely amazing it is when a project goes this well. Especially when you are dreading it.

The first step was the worst of it, I think. We are living in this tiny (14’x24′) house with two preschool aged children and I have to clean around the old wood stove and make

any empty clean spot for it’s new location. The space it requires is about 3’x5′. We finagled and schemed and found enough room to put all the stuff while we cleaned and moved things around.

Next step was for the man to climb up on the roof and take apart the old chimney and lower it down carefully so that we don’t damage it and have to replace it. Once he disconnected all the parts, he threw me my end of the rope. With me in the front of the house and him in the back with the chimney, he tied off the piece of pipe and we slowly lowered it to the ground. It went very smooth, no damage done, and then the rest of the parts came apart nicely and came down.

Patching the hole in the roof is the most important part of this project. First we had to salvage some scrap 2’x4′. He screwed the 3′ pieces to the trusses on either side of the hole. They ended up flush with the trusses so that a piece of plywood could be screwed down to the 2’x4’s and fill the hole. Not a perfect fit, but pretty damn close. After the plywood was up and the roof was cleaned up, a large piece of tar paper was lied out on

the roof, covering the entire hole with generous overlap.
My next step was to get up into the very packed full loft and guess where the holes from the bolts that held the braces were hidden, under the insulation and draft guard.

First guess for both sides!  Again, far less painful than to be expected. While I did this, the man cleaned everything up. The stove wasn’t very dirty at all, so again, things went well.
I didn’t do the work, so I could be wrong, but putting the stove back together in it’s new place was pretty simple. We moved the cement board for the floor and wall, and a small piece for the ceiling at my insistence (I’m not too sure we need it). Then we moved the wood stove itself, then the man cut a new hole in the wall and assembled the new chimney. Again, I have no idea how difficult this part was because I wasn’t really needed and I had my own jobs to do. I judge that it went well because there were no injuries, yelling, or any other forms o

We now have very easy access to clean the wood stove at the end of every winter. It is also in a much better location inside the tiny house. Where we had it before, it tended to take over the whole house and get in the way. Now it is nicely in a snug corner of the house where it is near our so called counter space for ease of cooking. I can also curl up on our giant bean bag every morning and start a fire while mostly cozy and warm. Perfect. 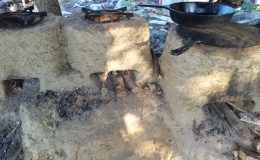 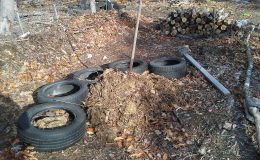