I chose the outdoor kitchen to be the first project on the new blog because this kitchen is my baby.  My outdoor kitchen is far nicer than my indoor kitchen will ever be.  It has it’s own garden, rain collector,  rocket stove, and other good stuff.  Lots of projects for me to share!  First things first: building the frame of the kitchen.

An outdoor kitchen has been a dream of mine for quite a while now. I love to cook outside and eat outside. I love the idea of the mess being outside (and staying there if outside has its own kitchen). When we first got here, I had a beautiful kitchen planned and I was going to build it right away. I even started. But never finished. Last year I had various cooking implements set up in various places around the outside of the tent. We had a table that we used most often, but no kitchen. This year I am going to have an amazing kitchen. Anything will be amazing compared to what I have had in the past years.

During autumn last year, I gathered rocks and began to outline where the kitchen would go. I put in a second row of rocks around those in order to outline the garden beds that would surround the kitchen, and an extra round garden bed off of the original outline. I filled the beds with rotting logs, sticks, and leaves in hopes of rich soil come spring.

I know that it doesn’t happen that quick, but I can hope. As I dug around the lot for various reasons, I kept the topsoil in buckets and eventually had the beds covered with good topsoil. Next year, the beds will be in much better shape, but they should do alright this year. In fact, almost all of this year’s projects will be better next year.

Once the border was put together, we got to work on the roof. We will be cooking outside when it is raining and when it is really sunny. We need to have a roof over the cooking area. I dug seven holes for the posts and the Man cut the posts for me. I used an empty three gallon water jug in each post hole to fill with cement. Sort of like the tubes people sometimes buy for the cement, but free.

The posts were made of trees that were scrap wood from when the logger came through. The next step was getting annoyed trying to figure out how to get the posts standing. Neither of us had any idea what we were doing and there was discussing and maybe a little arguing. I tend to hurry in

to projects and do them wrong the first go round and the Man tends to spend a painfully long amount of time thinking about each and every step of the whole project before he even starts. We can usually even each other out fairly well.

What we finally decided to do was to pre-measure the posts, cut them to size, and then stand them up one by one. I had originally nailed the cross beam to the top of the posts and planned to stand it up this way, but that was not a good idea. I unassembled my posts and beams and got to standing them up one at a time.

I decided on using cement to keep the posts standing. The first step was to get the cement mixed. I put a small amount in the bottom of the water jug and then put the post into the jug as level as possible, without using any tools. Then I filled around the base of the post. The cement was just enough to support the post while it dried. I also put some cement around the outside of the jugs to add support.

Once the four corners were up, I put the center posts in place. I used a layer of cement under the posts to bring them to the proper height. They actually popped into the pre-cut notches very easily and then I nailed them into place. Surprisingly, this whole process was quite painless, except for standing up on the ladder and nailing the pieces together at an awkward angle. I had come across a tree that branched out into three trucks and

decided that it would look great in my kitchen and I could hang things on it. I put this along the back wall of the kitchen, sort of all by itself.

The next step is connect the two sides. Using even thinner pieces of scrap wood, like tree branches, I formed a roof over the kitchen. Lining them up and nailing them to the beams, a real roof began to emerge.  I’ll show you the covering of the roof in another post, where I’ll show you the rain catchment barrel.

The frame as it is, is not quite sturdy enough.  It would be plenty sturdy if it would never see a snow load, but we live in central Maine.  So I did some more scavenging and hooked the chop saw up to the generator.  I cut some angle pieces and nailed them in place.  Not only did they make the frame much more sturdy, but they also made the kitchen look like I knew what I was doing.  I think it came out very nice looking. 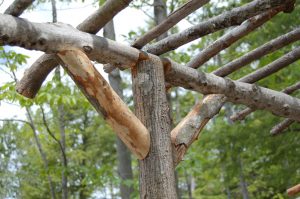 That is all there is to the frame.  Very simple, very functional, and really nice.  I also forgot to mention that I left some of the beams long so that I could hang hummingbird feeders and mobiles to decorate.  Total money spent on this project so far: $15.00 on a box of nails.  I have barely put a dent in the box, so there will be plenty for the other projects to come.

The next post will be about the roof and the rainwater collection “system” that is incorporated into the kitchen. 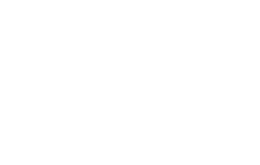